What is a Common Tower?

A Common Tower is a temporary structure, tied to the face of a building which can accommodate up to 6 large construction hoists and a staircase for a secondary means of egress and access. The tower is directly anchored and installed to the building with the hoists all being independently anchored to the tower, which unlike a conventional scaffold can accommodate the high applied hoist tie loadings.

Alternatively if you were to place this number of hoists in a line you would need a footprint of approximately 18 metres with an equal sized vertical rip to the façade. This would equate to 18 metres worth of cladding panels that cannot be installed and a large number of apartments that could not be finished.

Whereas, the Common Tower can bring up to 6 machines in site against the tower access system, leaving only a 2 – 3 metre opening to the building façade. This not only makes the tower an efficient central highway for your vertical transportation, but more importantly allowing a greater installation to the building façade resulting in the completion of more apartments. 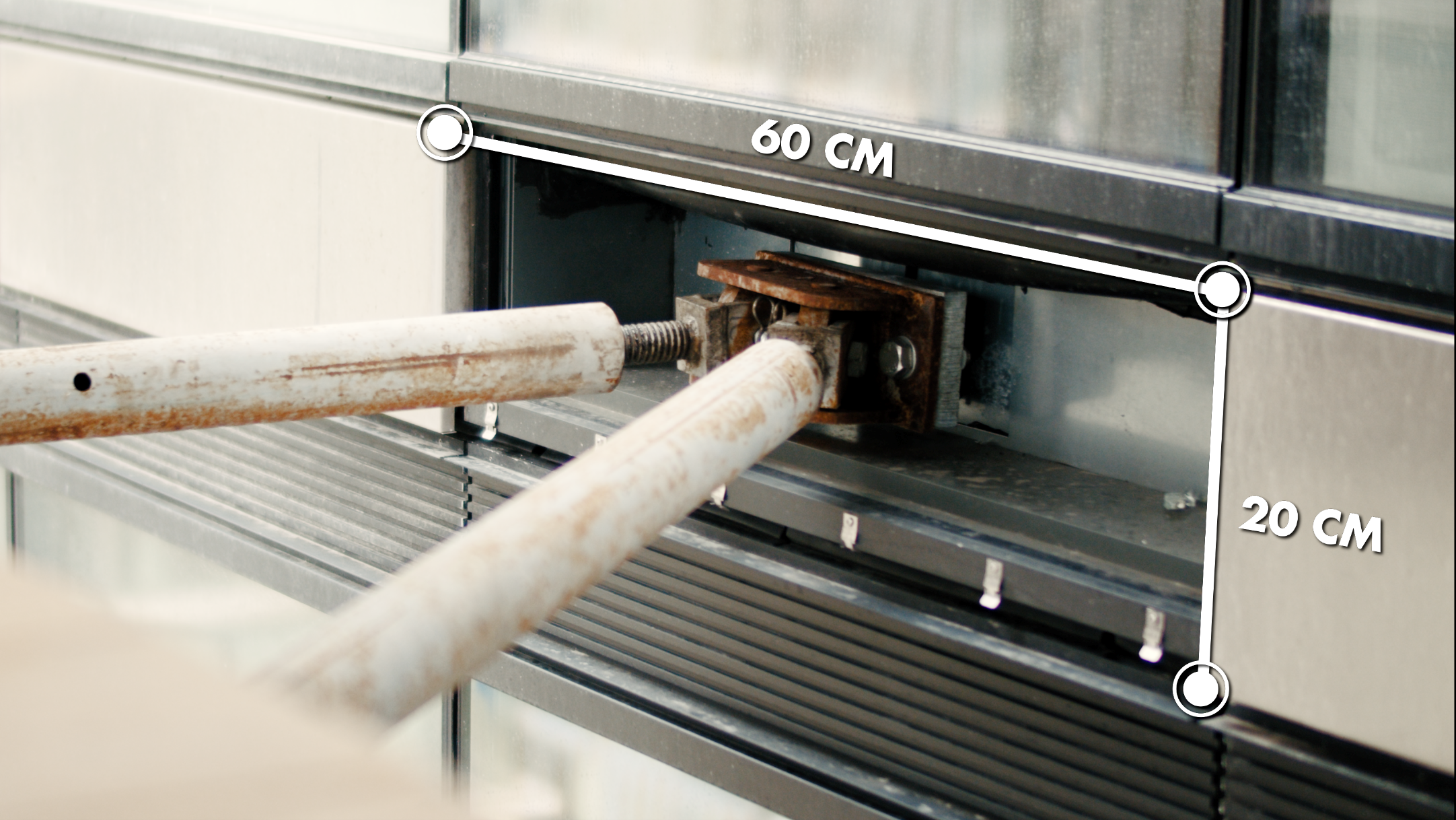 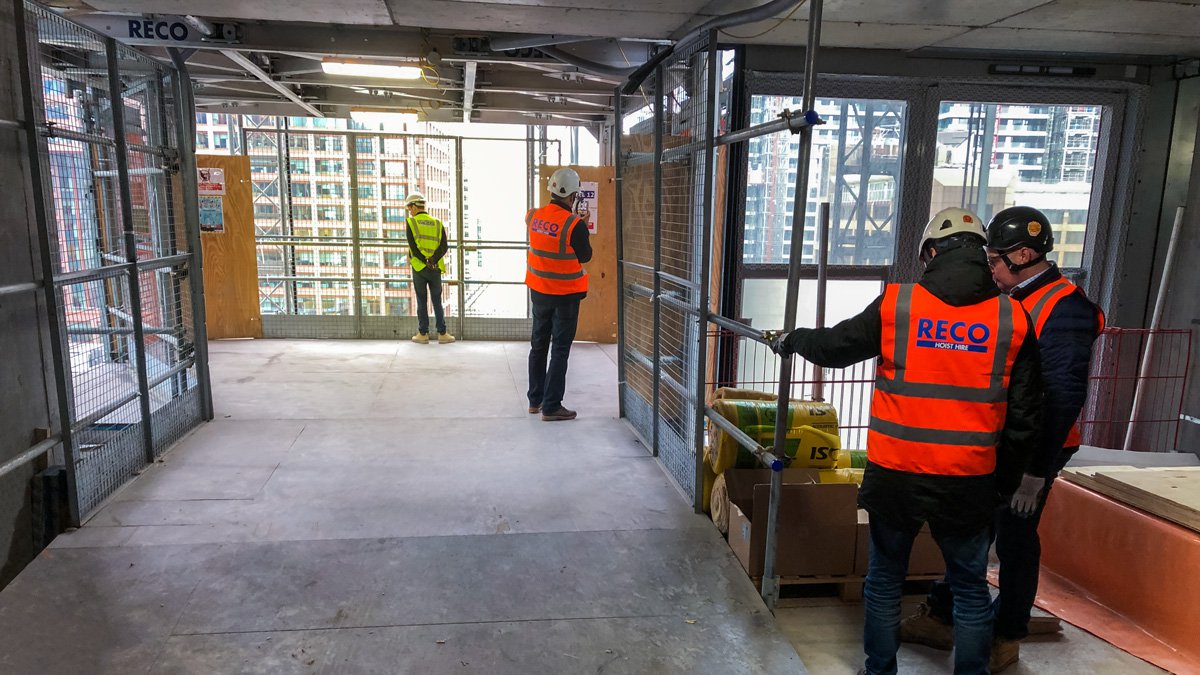 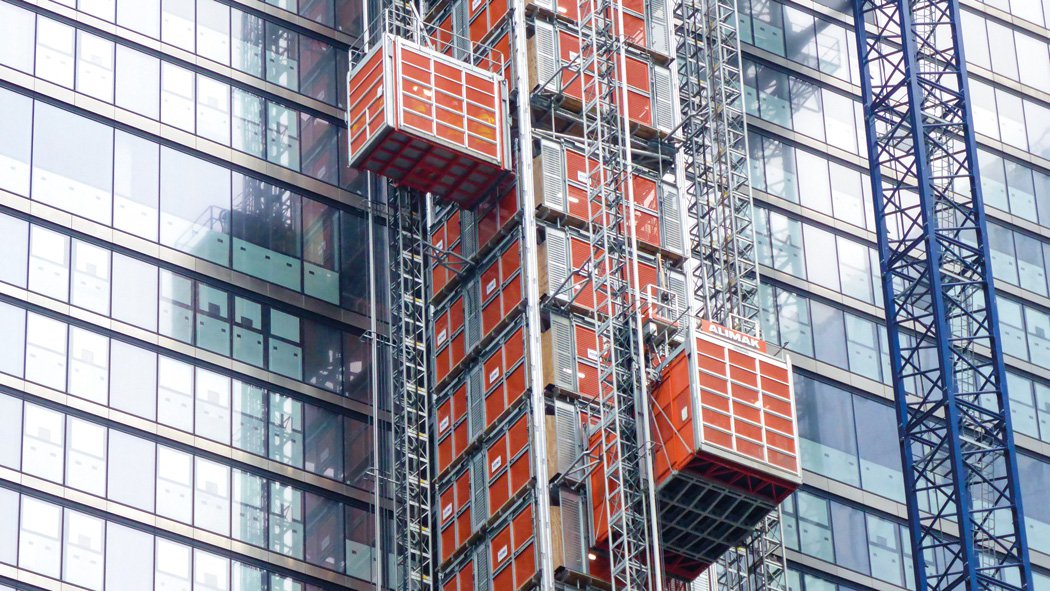 Our tie-system makes it possible for construction companies to improve the cladding speed on their high-rise projects. RECO engineers developed a system that allows the ties to be removed, the cladding panels to be installed and the ties to be put back in again. This clever solution allows you to make rooms or even entire building floors dry and watertight, so the fit-out program can not only start but can be completed. When the time comes to dismantle the Common Tower the ties can be removed simply by means of the BMU or by other planned alternative means.

For contractors who are looking for ways to improve building speed, a RECO Common Tower is absolutely the way to go. The tower provides space for a maximum of six construction hoists or possibly five if you are to opt for the ultimate Stros Mammoth passenger hoist. These incredible construction hoists can transport entire prefab bathroompods and other large materials of up to 4,000 kg.

By integrating several add-ons to the Common Tower access system at your construction site, you are able to use the tower even more effectively. To improve horizontal transportation on construction sites, RECO specialists developed the modular Loading Dock system. These customised transportation platforms allow for level barrier-free access between the lorry and the designated hoist. This reduces waiting times tremendously with decreased movements of forklifts at the construction site and accommodates the safe storage of materials whilst awaiting vertical transportation.

For more space to store goods or to create safe passages alongside the building site, the Common Tower materials can also be used as risen platforms for overhead protection. These crashdecks will prevent damage to goods or surroundings as a result of falling objects.The full integration within the integral system of the tower allows for a reduced footprint, along with added benefit of the reduced installation time. The Common Tower overhead protection system allows personnel to feel secure during construction, with the knowledge that they are safe and sound whilst working on or in close proximity of the tower and hoists. 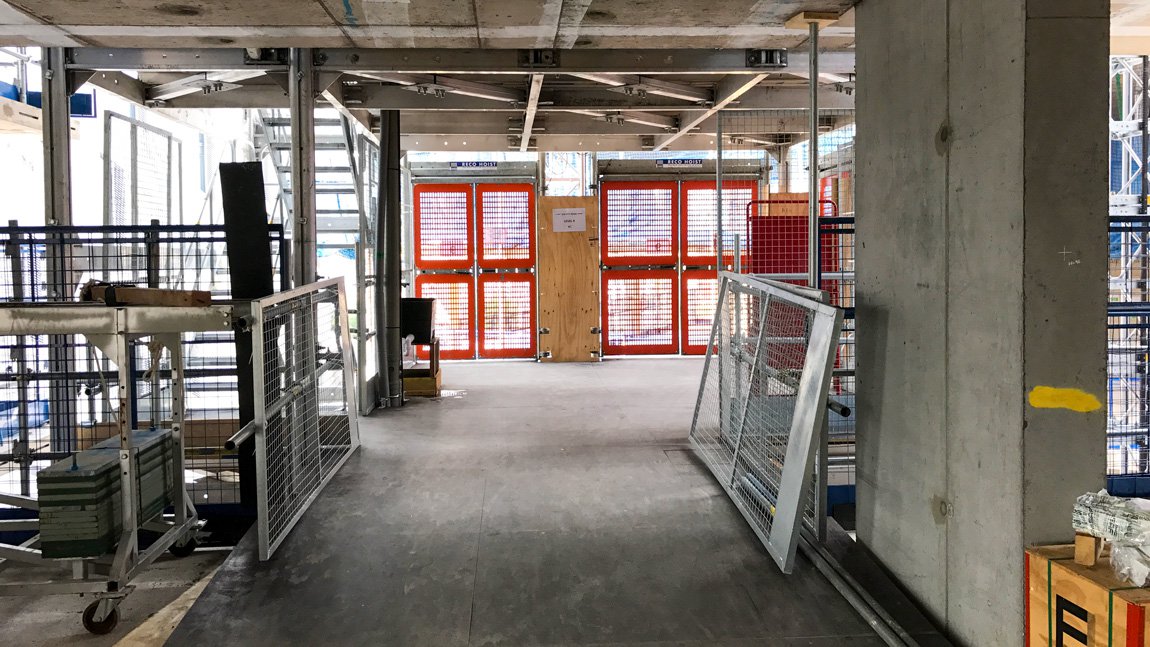 Being suffocated and swamped by deliveries on your construction site with limited storage capabilities? Why use valued crane and hook time to unload all your materials from site transportation, then transferring to upper floor levels? Especially when you can transport materials and personnel quickly and efficiently if opting to use a construction hoist in conjunction with the RECO Common Tower Access System. Larger passenger hoists, such as the Alimak Scando 650 XL FC 50 or the Stros Mammoth passenger hoist can also accommodate the transportation of larger cladding panels that can be fitted using spider cranes or equivalent, saving immeasurable hook time. 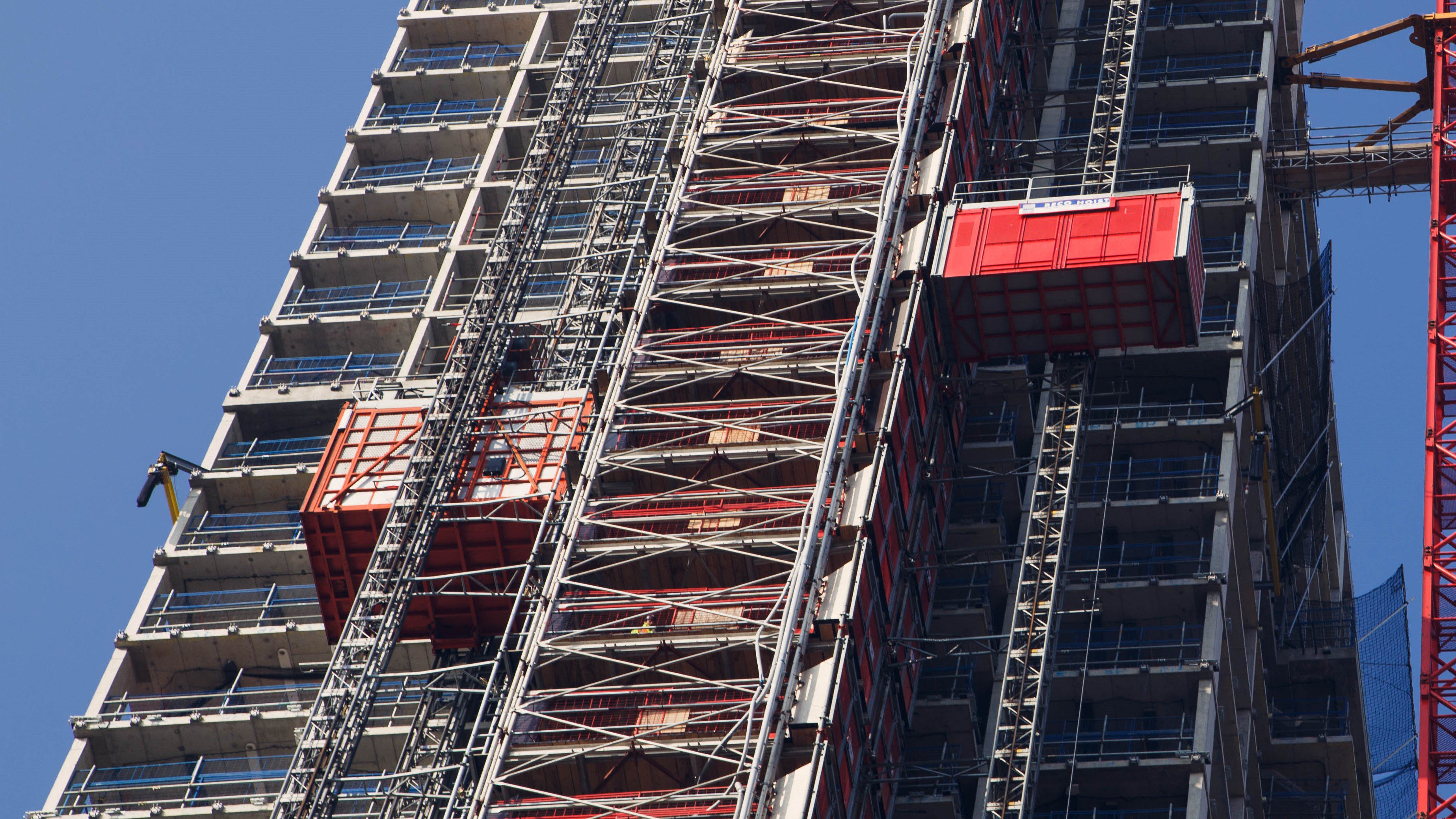 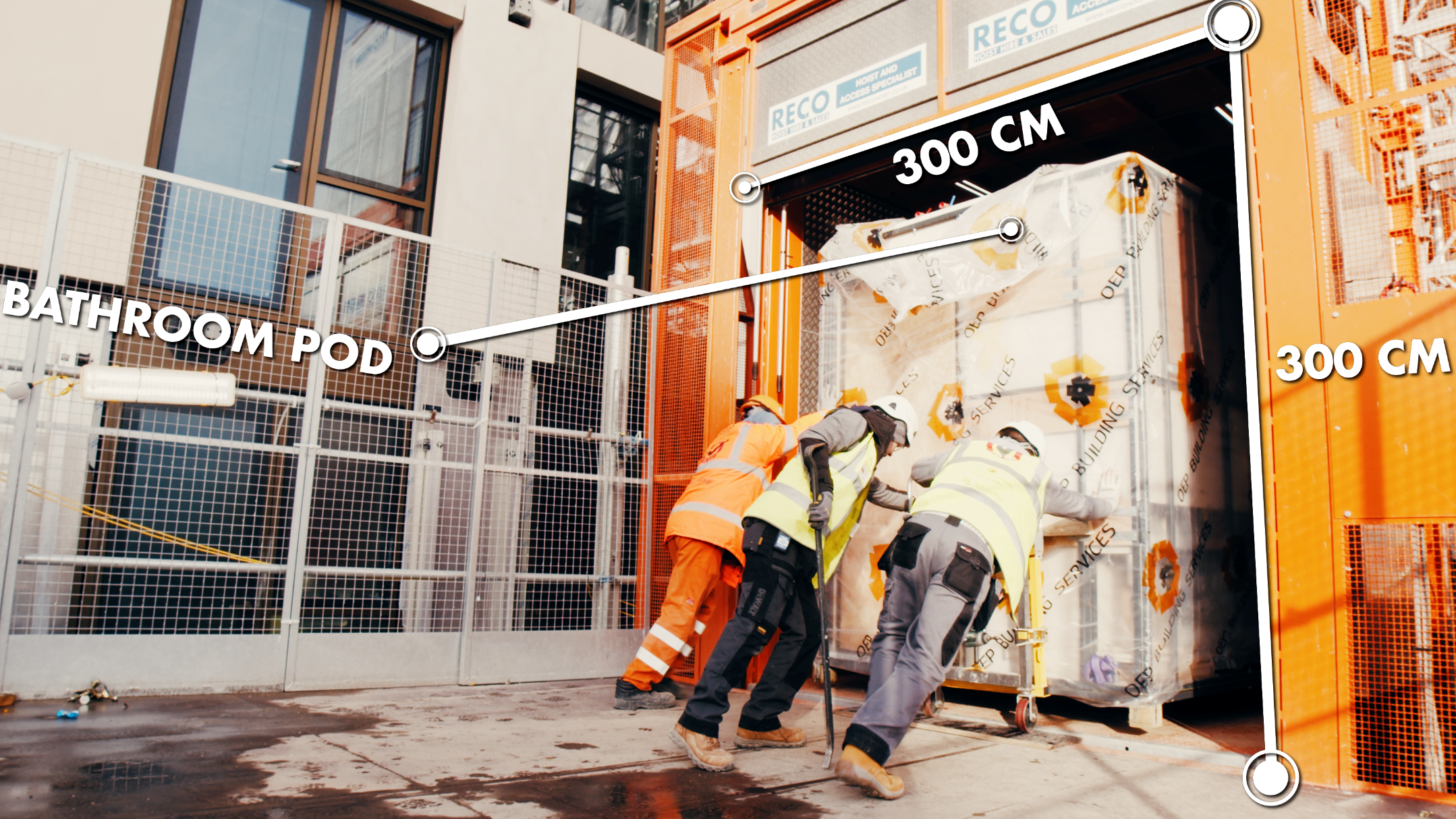 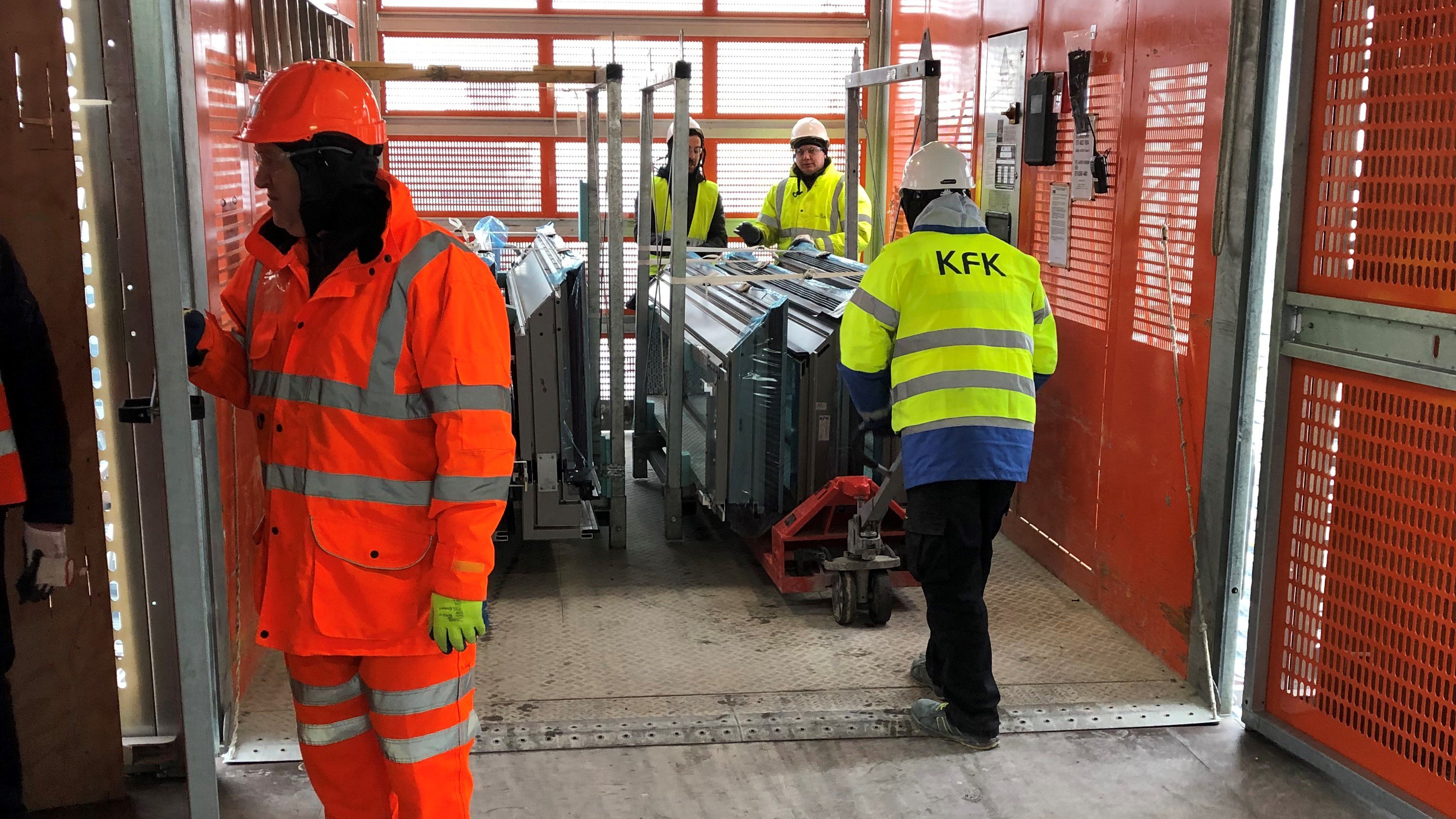